Process: Documentation from the Artist

Hi, I hope you are doing well staying at home, and thank you for checking out Double Soft! Creating this comic was a slow, rolled out process, and one of the main reasons I wanted to have a release was to share my experience with people. Every comic has a unique process behind it so I hope that you find it informative. Please reach out to me at mlmxwell@gmail.com or social media if you want to have a chat about comics or have any questions!

Beginning phases of the comic
I drew a 6 page comic during the Push Pull 6 hour comic challenge that became the predecessor of Double Soft. I was inspired by a recent visit to the Living Computers Museum and I wanted to portray an old computer that was being difficult to communicate with. I liked the characters and the setting so much, I decided it would be cool to expand upon the world that it existed in.
Scroll through the slideshow to see the initial prototype.
Thumbnails and Script
I began writing an expansion of this idea a few months after this. Then, I drew some thumbnails. A lot of the original script changed after I started drawing out my ideas for each page. 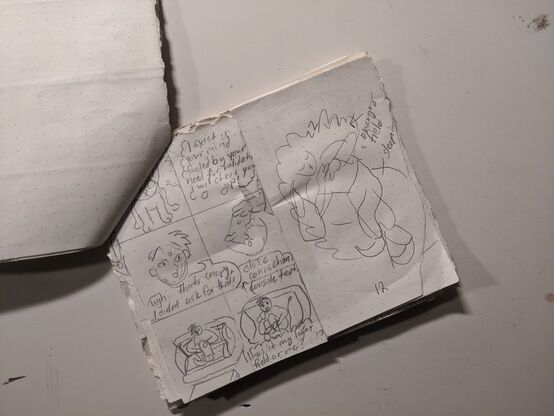 The above image depicts several small thumbnails taped together in stapled pages during the initial thumbnail process.
My initial approach towards doing thumbnails was fast moving and messy. Drawing the thumbnails like this helped me to be more descriptive with the way I wrote my script.

At this time I also began the process of writing more descriptive directions for drawing panels.
Writing to the Artist (or in this case myself): Some Terms
​Full Shot: Head to toe shot
Long Shot: Sets characters against the landscape
Close Up: Close up on a characters face in order to convey emotions
Extreme Close Up: IE close up on something like eyes, or nose, or a glass of water, or an object in order to denote importance in the story
Point of View (POV): Shot from a characters perspective
Over the Shoulder (OTS): This shot puts the reader in the position of listening to another character. It can also create the effect of eavesdropping, or creates mystery if you don't know who's shoulder you’re looking over.
High Angle: The camera points down to look at subjects
Low Angle: the camera looks up at subjects
/ indicates the end of a speech bubble
After more editing took place, I drew another set of thumbnails. This one came in the form of a mini booklet in order to make it more readable for people I was collaborating with. 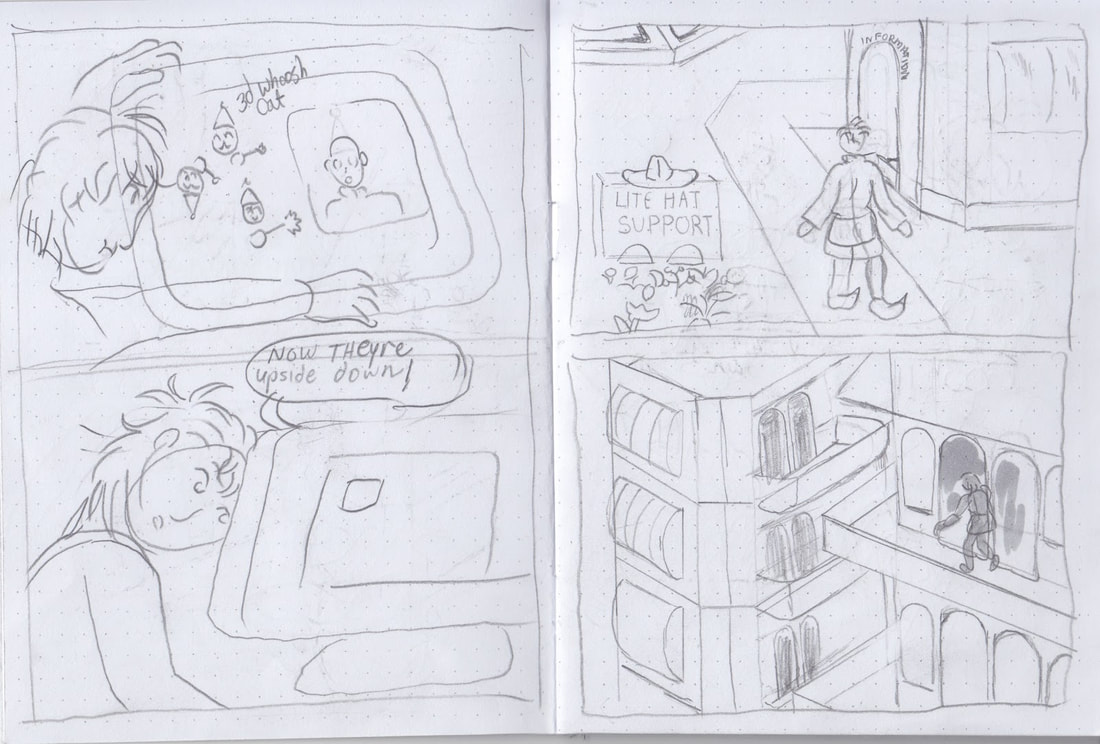 Drawing Pages
Then, once more editing happened and a few more additional scenes were written, the pages were ready to be drawn. I overlapped each image with text in Photoshop in order to keep my handwriting more consistent. Thanks to Maxx for doing a spell check! 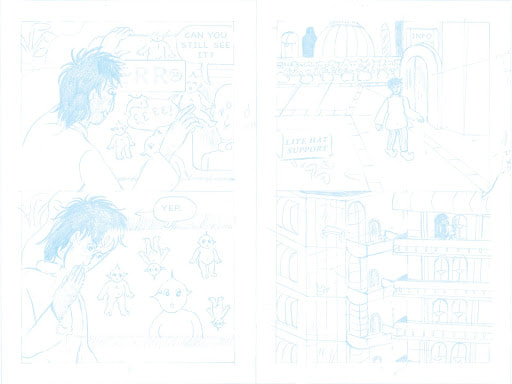 Then the inks were drawn, and overlaying greyscales added. Originally I had tried to create the tones with a physical penciled grayscale effect using hand drawn media that was traced over the original image. Unfortunately, I found that this didn’t look as good once it was scanned in and edited in photoshop. A minimal digital grayscale effect ended up being what I went with.
Thanks for taking the time to read a little bit about my process for this book. Please message me at @lurnmaxwell on instagram or email me at mlmxwell@gmail.com if you have any additional questions!